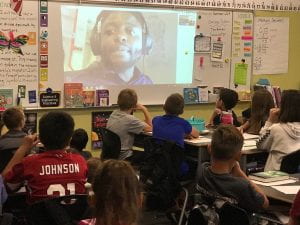 Welcome back to our class blog! Recently we went on a Virtual Field Trip (Skype) with a very nice man name Mr. Frantz. He works at The Intrepid Sea, Air & Space Museum. The museum has a lot of spacecrafts. The first space shuttle got into the air by riding on a normal airplane. Unfortunately, it did not reach space. We learned a lot more fun facts like the first animal launched into space was a dog. If you sent a balloon into space, it would expand or get bigger. One of the most interesting facts is that the museum is on a ship that is bigger than the Titanic, and you can actually see how they retrieved space capsules from the ocean. Mr. Frantz told us facts about the planets. For example, the distance between the earth and the moon is the same as if you lined up all the planets in between, and if you enter a black hole, you can’t escape. Some of the most funniest facts are that astronauts have to wear diapers, and sandwiches are banned in space. 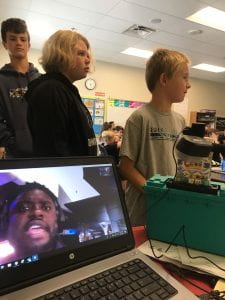 In science class we did a fun Skype with The Intrepid Sea, Air, & Space Museum. We learned so many fun and interesting facts about the museum. Did you know that the Soviet Union was the first to send a dog into space? It is called The Air Museum because it holds a lot of airplanes from the past, sea because it is a big ship on the sea, and space because they know and talk a lot about space. The next time you go to New York, we highly recommend going to The Intrepid Sea, Air, & Space Museum.

By Addison, Carly, Ethan, and Connor 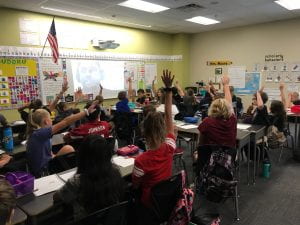 In science class we learned all about what things were used to get to space. I enjoyed learning and listening. I personally love all things space. A couple things we learned was that Russia sent the first satellite, dog, and first woman to space. We also learned that the Russians were against the Americans, and it was called the Cold War. The two countries were in a race to see who could make it to space first. Another thing I learned was astronauts had to eat dehydrated foods. I enjoyed doing this topic. This was fun and a good experience. I think Mrs. Moore is one of the best science teachers ever!

What virtual field trips have you experienced?

Do you know why sandwiches were banned from being consumed in space?