Once upon a time, a very long time ago there was a man named Arbor. He was a thief that would steal from a magical person named Les Bois. She had lots of stuff for Arbor to steal. One day, when Arbor was going to steal from Les Bois, she caught him in the act. Arbor was very afraid because Les Bois could end him in seconds, but she did not, instead she told him, “You come into my house to steal? Yet you steal not for food or a home, but to make me angry! Your punishment shall be to say in the forest as one with the forest FOREVER!” she said. Arbor was turned into a tree. 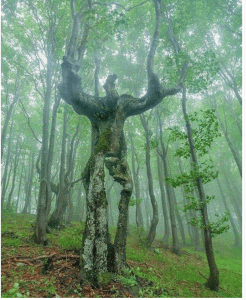