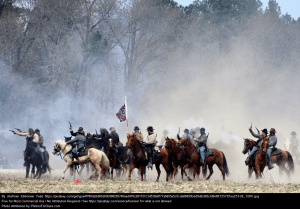 There was a new war starting and I decided I wanted to sign up. The first day of training and my captain asks us a question. The question was can you load your rifle in under 15 seconds on your first try. I said no I could not. Then the captain asks me why and I say practice makes perfect.

July 21, 1861, the battle of bull run. Today was our first battle out of 3 I would say. We tried to take the confederate by Surprise by their way to Richmond, the capital of the confederate. Lincoln ordered 30,000 of his troops including me to attack the confederate. But unfortunately, for Lincoln we were not well trained. In the distance I saw people having a picnic watching us die. And the most they could do is have a picnic. After that, the confederates were in full charge. We had no choice but to retreat. As I was falling back, I saw my captain get his head blown off. After the battle I trained and thought of a strategy to show my captain and my friend played the banjo to pass the time.

The winter of 1861 to July 1862. We got a new general his name was McClellan. He was a good captain. When we were about to attack Richmond McClellan did not. Instead, he waited for a long time. Then it happened General lee attacked us instead and we were forced to retreat. In the battle a bullet went right by my ear and I nearly went deaf. The only thing I could hear is the scream of the dead or dying.

March 1862 the battle of ironclads, the union had blocked all the confederates’ ports so they could not travel by sea. But the least expecting thing had happened the Merrimack was in the water. But the confederate’s covered it with steal. But the Union also had a ship built with metal the monitor. Then the two ships met at the coast of Virginia, and the battle had begun. But this battle was not like any other there was no winner they had just started firing for hours until they both realized there was no winner. But my luck was better than the whole battle I found General Lees battle plan in a cigar pack in the river.

September 1862 the battle of Antietam, the war has been going on for longer than I have expected it to. the confederates had decided to attack in northern territory. They were trying to cut off the railroad tracks to Washington D.C., but the union army was too strong the confederates were forced to retreat ‘WE WON THE BATTLE,’ I screamed. But that was not the end McLellan finally got fired, and we lost over 12400 men in this battle. But there was a good ending for me I got a new rifle and I have already started using it.

After the battle Lincoln issued an emancipation proclamation on January 3, 1863. It was to free all slaves in confederate control unfortunately no slaves were freed. I was feeling a little upset that no slaves were freed. But it would give us the union army an advantage because no freed slaves lead the African Americans. But Lincoln was happy because the E.P as his greatest stand.one of the most recognized battle ever was the battle of Gettysburg. The battle of Gettysburg started out as a ceremony for the new graveyard that was built for union solders.

The date was July 1863. I was securing the area after we saw confederates snooping around. But the first day we had to retreat. By the second battle we were trying to take a vantage point that changed the battle and we got it. Day 3 was the last day of the battle. We were in the woods waiting our orders from General picket. Then the best moment in the war ‘CHARGE’ picket yelled. We had gone down the hill pushing lee back. After 3 days lee had finally retreated, and we had won. The deaths were no laughing matter over 46,000 men (about twice the seating capacity of Madison Square Garden) were killed in that battle. And my friend was shot in the back of the head and now he cannot see. After the battle, the unions first draft happened. We went to New York because people had forgotten about the war. A bunch of protesters were yelling and one through a rock at my head. Lincoln gave his famous speech the Gettysburg address. I was happy because we won the battle and sad because of the deaths. The battle of Vicksburg was an important battle. If we won, this battle, we would take Mississippi under union control and we did.

We won the war on July 4, 1863. The devastating thing I heard after we won a war is you must burn down cities. we set up camp and started singing and we got some rest. General Sherman order us to destroy anything in our path and we did. A lot of the union army was captured including me we were brought to a prison at Andersonville. All we had was a tent they did not give us food or water if we were too close to the wall, they would kill us. But I made it this far, but I was not sure if I will make it farther. But then a water stream came out and we were all saved.

April 9, 1865, we had caught lee at a courthouse and the were was put to an end. we were all celebrating but then grant said stop we were all confused.  then he said, “they may have fought for the wrong side, but they are countrymen again.”  After the war, we all were handed a contract saying do you agree with grant terms of acceptance and letting the confederates to roam free in America. A lot of people did not agree with him, but I did.